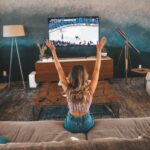 After more than a year of empty arenas, shortened seasons and canceled games, the sports world is officially back… just in time for hockey season! The 105th season of the NHL returned to play on October 12 with a doubleheader on ESPN – the first time an NHL game had been aired on ESPN since END_OF_DOCUMENT_TOKEN_TO_BE_REPLACED